“We must come to terms with the heartbreaking reality that those who pose the greatest risk to our children are within our families, churches, and circle of friends.” 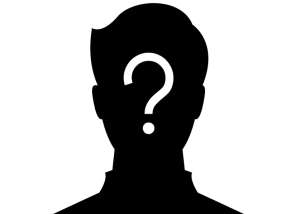 We like to think that we know what child abusers look like. That we can pick them out of the crowd based on their creepy mustaches, darkly-tinted cargo vans, or their giant, thick-rimmed glasses. But those stereotypes are just that: stereotypes. And like all stereotypes, they fall tragically short. The fact is, child abusers are not Others. They do not walk around with signs that say, “Monster.” They are able to violate our trust — and children’s lives and bodies and minds — because we trust them.

This page aims to equip you with information about the true and factual characteristics of child sexual predators. It may seem counterintuitive to what you assumed. But it is vital that homeschooling communities come to grasp with these characteristics. Otherwise we’ll just be wasting our time and energy on misinformation.

*** If you’re interested to covering this information during your homeschool group’s Child Abuse Awareness Day:

This makes for a good group activity. Print and hand out HARO’s “Can You Identify the Average Child Sexual Predator?” quiz to all the participants. Have them take the quiz individually and then, as a group, go through the questions and explain the right answers.

Let’s begin with dispelling some myths about predators. Many of these myths you have likely heard before, as they are repeated on TV by news anchors, spread like wildfire throughout Christian homeschooling circles, and sometimes even featured on respectable organizations’ websites. After looking at these myths, we’ll turn to the actual facts regarding the average child sexual predator.

1. Myth: Predators are strangers with candy in white cargo vans.

Fact: “Stranger danger” is a red herring. People who sexually abuse children are statistically more likely to fixate on specific children in their personal networks. The Child Molestation Research and Prevention Institute has noted that, “90% of child molesters target children in their network of family and friends.” Put another by G.R.A.C.E.’s Boz Tchividjian, “Only 10 percent of child molesters molest children that they don’t know.”

Fact: Actually, people who sexually abuse children are more likely to be fixated on children than any given gender identity: “Many child molesters cannot be characterized as having an adult sexual orientation at all; they are fixated on children.” And as we shall see later, people in opposite-sex relationships are more likely to abuse children than people in same-sex relationships.

3. Myth: Predators were all abused as kids.

Fact: The “cycle of abuse” is more myth than reality. While Child Help notes that it’s true “about 30% of abused and neglected children will later abuse their own children,” it’s also important to note that means 70% of abuse survivors will not abuse their own children. Insinuating that “abused people abuse people” only increases the stigma around disclosing and discussing personal experiences of abuse.

Fact: Predators can definitely be Christians, homeschoolers, or even Christian homeschoolers. A prime example would be the recent revelations regarding the Jackson family from North Carolina. The parents of this family hid and ignored child sexual abuse perpetrated by six of their sons for over a decade. Two of the brothers were members of Hope Baptist Church, pastored by Vision Forum colleague Scott Brown. Many instances of severe abuse and neglect documented on Homeschooling’s Invisible Children also demonstrate this. As tragic as it is, child sexual abuse can definitely materialize in Christian homeschool communities.

5. Myth: Predators are easily identifiable because of their big glasses and mustaches.

Fact: Stereotypes about predators are just that: stereotypes. They actually fall extraordinarily short of the actual picture of the average predator, as we shall see shortly. And as we can see from the aforementioned example of the Jackson family, predators can look just like the people in our surrounding community. The Jackson brothers, who sexually abused their sister, appeared like model conservative Christian homeschool alumni. There is no magic formulate, therefore, to identifying abusers by outward characteristics. As the Vermont Department for Children and Families states,

“It’s impossible to describe a typical abuser. They look and act in various ways, can be found in all areas of society, and are often well-respected members of our communities. They may appear to be kind, caring people who are great with kids. Abusers work hard to cultivate this image—so people will not suspect them of, and will not believe it if they are ever accused of, sexually abusing children.”

If the above are myths, what do we know about the average child sexual predator?

We know that, contrary to popular stereotypes, predators resemble the average American male in outward characteristics. As the Child Molestation Research & Prevention Institute says, “We know that child molesters are as equally married, educated, employed, and religious as any other Americans.” The image below demonstrates this:

Here some specific facts about predators:

1. Child sexual predators are more likely to be married or formerly married.

Although females do sexually abuse children, the Child Advocacy Center reports that men are offenders 94 percent of the time in cases of child sexual abuse.

3. In their day-to-day lives, child sexual predators are more likely to identify as heterosexual.

As stated previously, people who sexually abuse children are more likely to be fixated on children than any given gender identity. However, among child sexual abusers who do appear to have an adult sexual orientation, heterosexuality is far more common: “A child’s risk of being molested by his or her relative’s heterosexual partner is 100 times greater than by someone who might be identified as homosexual.” How much greater? According to the Child Advocacy Center, “96 percent of the perpetrators are heterosexual.”

The Abel Harlow Child Molestation Prevention Study found that, out of a group of approximately 2,500 predators, about 1,600 molested girls exclusively and another 400 molested both boys and girls. “Many more men molested girls,” the study reports.

5. Child sexual predators with the most number of victims each are more likely to molest both boys and girls.

While it is true that many more male child sexual predators molest girls, it is also true that number of victims each predator is likely to have increases if that predator molests both boys and girls. According to the Abel Harlow Child Molestation Prevention Study

The Abel Harlow Child Molestation Prevention Study found that 90% of predators describe themselves as “religious.”  Furthermore, predators often target religious communities because they find them to be more vulnerable and trusting. Boz Tchividjian explains that,

“Abuse is no less prevalent within the faith community. In fact, there are studies that demonstrate that the faith community is even more vulnerable to abuse than secular environments… Other studies have found that sexual abusers within faith communities have more victims and younger victims. This disturbing truth is perhaps best illustrated by the words of a convicted child molester who told Dr. Salter, ‘I considered church people easy to fool…they have a trust that comes from being Christians. They tend to be better folks all around and seem to want to believe in the good that exists in people.'”

7. The average child sexual predator targets the children of their own families and friends. 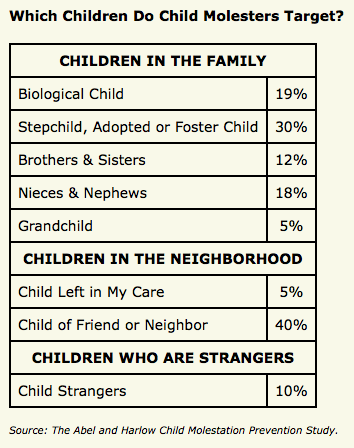 Abuse in general — not just sexual abuse — is most often perpetrated by children’s own parents. The American Humane Association notes that, “79.4 percent of perpetrators were parents and 6.8 percent were other relatives”; in fact, “In under 1 percent of child maltreatment cases the perpetrator was a foster parent, residential facility staff, the child’s daycare provider, a legal guardian, friends or neighbors, or other professionals.”

Child sexual predators are not as frequently children’s own parents, but they are people who have gained trust within children’s lives. The Vermont Department for Children and Families explains that, “Nearly all child sexual abuse is committed by people known to children and families, including: Family members such as parents, stepparents, siblings, grandparents, aunts, uncles, and cousins; and people in a family’s circle of trust such as friends, neighbors, teachers, or coaches.” Statistics indicate that, “More than 90% of juvenile sexual abuse victims know their perpetrator in some way.”

Behaviors to watch for

Child sexual predators use “grooming” to target their victims. Boz Tchividjian explains the grooming process as “the process which the offender gains access to the child in order to develop a trusting and/or authoritative relationship. Once such a relationship has been created, the perpetrator is often free to abuse.” Homeschooling parents, leaders, and teachers need to be on the look-out for predators who attempt to groom children.

Potential warning signs for child sexual predators and grooming include, but are not limited to:

Predators may appear inappropriately interested in the sexuality of particular children. This could include talking repeatedly about a child’s body development or dating history.

Predators may refuse to allow their own children to participate in social events.

Predators may be be domineering, rigid, or authoritarian in child discipline.

Predators may often appear jealous of their children’s friends or activities.

Predators may accuse their children of “promiscuity” or appear personally “betrayed” by their children’s romantic or sexual relationships with others.

Predators may directly target children by becoming major parts of both their and their families’ lives through church, family, and school events.

Predators may go out of their way to get adults to trust them, despite children feeling noticeably uncomfortable around them.

Predators may seem oblivious to personal space, making others uncomfortable by ignoring socially acceptable limits regarding emotional and physical boundaries.

Predators may belittle or tease a child for feeling uncomfortable about the violation of that child’s personal space or boundaries.

Predators may insist on physical contact with a child — even when the child does not want the contact — such as: hugging, kissing, tickling, or wrestling.

Predators may “accidentally” walk in on children or teenagers in the bathroom on a frequent basis.

Predators may have “secret” interactions with children. These interactions may appear outright alarming, such as privately sharing alcohol or pornographic material. But they may also appear somewhat innocuous, such as repeated and private communication via email, phone, or text.

Predators may insist on lengthy and/or uninterrupted time alone with children.

Predators may go out of their way to appear “helpful” by frequently volunteering to babysit children for free or take them on unsupervised outings.

For more information about behaviors to watch for, see the following resources:

Answers to “Can You Identify the Average Child Sexual Predator?” quiz: